Skip to main content
You have permission to edit this article.
Edit
Home
Newspapers
About
Contact
1 of 8

Central Catholic captain Sean Gray moves the puck up ice against Westford Academy on Wednesday. The two teams played to a 2-2 tie.

Central Catholic goalie Timmy Briley makes the save on Wednesday. Bailey played well in a 2-2 tie with Westford Academy. 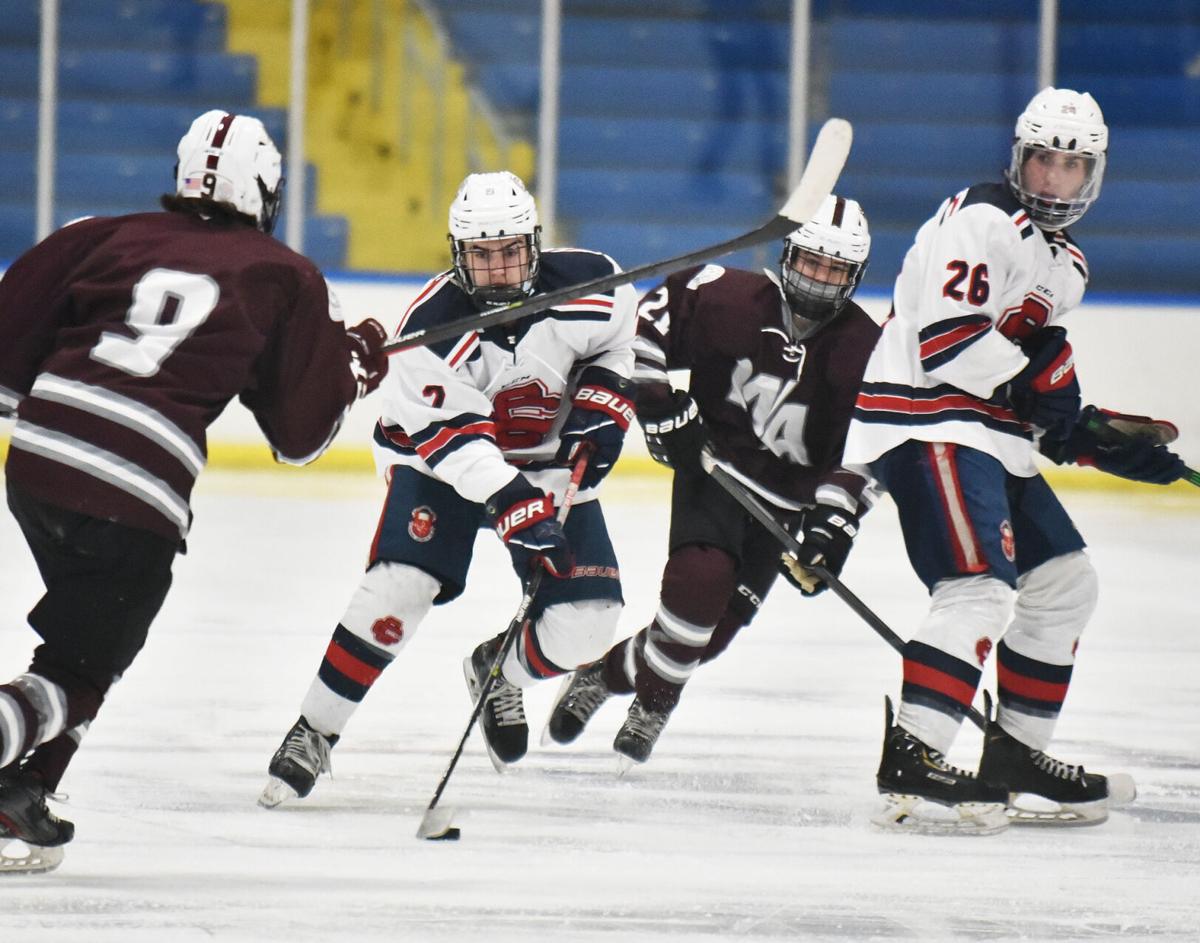 Central Catholic’s Mac McCarthy moves the puck behind the net against Westford Academy.

Central Catholic captain Sean Gray moves the puck up ice against Westford Academy on Wednesday. The two teams played to a 2-2 tie.

Central Catholic goalie Timmy Briley makes the save on Wednesday. Bailey played well in a 2-2 tie with Westford Academy.

Central Catholic’s Mac McCarthy moves the puck behind the net against Westford Academy.

SALEM, N.H. — One solid period wasn’t going to get it done for Central Catholic boys hockey on Wednesday.

Running into an energized and gritty Westford Academy team, the Raiders surrendered a late third-period goal and were forced to settle for a 2-2 tie with the visiting Grey Ghosts at The Salem Icenter.

“A tie is never an ideal result, but both teams came out and played pretty hard,” said Central coach D.J. Conte. “Westford played a pretty physical game. They were good through the neutral zone and tried to capitalize on our mistakes, which were many tonight unfortunately.

“They kept fighting and kept coming. Our guys didn’t respond as well as they could have. We came out slow. We had a hard time handling the puck and a hard time moving the puck.

“We had some guys trying to do a little bit too much out there. It’s a little bit disappointing, but I credit Westford for giving us a good run here.”

Westford netted the lone goal of the first by Ryan Nelken with Central on the power play. The hole could have been worse, but Raider Timmy Briley kept it right there with some big stops.

The Raiders finally found their legs in the second period. and they did it the old-fashioned way, by amping up the physicality.

Central drew a pair of overlapping penalties midway through the period but were denied the equalizer by Ghost goalie Tyler Frazee.

First it was the captain, Sean Gray, who had the best chance, denied from in close by a flashy glove from Frazee. On the second penalty, Charlie Winship had a great chance to tie, in alone but again Frazee was up to the task.

“We had a couple chances, but their goalie came up and stopped the puck,” said Conte. “We have to have those guys bury those opportunities.”

A strange thing happens in this game when you keep grinding, though, and Brandon Maiuri finally broke through to even things with 6:38 left in the second, with assists going to Max Lane and Jack Stewart.

“Our physicality is lacking a little bit, but we did come out and respond in the second period,” said Conte. “Guys had some good body checks, caused some turnovers and drew some penalties. I guess we’ll take the second period, the other two we can leave behind.”

Central finished the solid frame with one final flurry, earning its third power play, one that left them 1:54 of man-advantage time to start the third.

And this time, the Raiders made good.

“Our power play is something we’re working on. We’re trying to fill some voids from last year. We have some guys stepping into some roles,” said Conte.

Ben Furry came up with the goal with assists to Brady Rickenbach and AJ Songini.

“Ben is a newly formed defenseman, he’s never played defense before, and Brandon Mauiri had a nice goal out there,” said Conte. “That line is hustling. Baby steps, but we’re moving in the right direction.”

“I was waiting for a little jump there, looking for some kind of breakaway or opportunity caused by a turnover possibly, it just didn’t happen,” said Conte.

But with under six minutes to play Westford point man Jack Nelken flicked a wrister into traffic that rattled and redirected off a stick and beat Briley to make it 2-2.

That’s how it remained, right through the five-minute, four-on-four overtime.

The Raiders, now 2-2-1 overall and 2-0-1 in MVC/DCL play, had the better of the chances in extra time with the extra space.

Andrew Duval and Songini each tested Frazee in the 4-on-4, but the Ghost was up to the task.

Briley was also challenge, inside the final seconds on a point-blank chance but he stood tall to preserve the stalemate.