Skip to main content
You have permission to edit this article.
Edit
Home
Newspapers
About
Contact
1 of 2 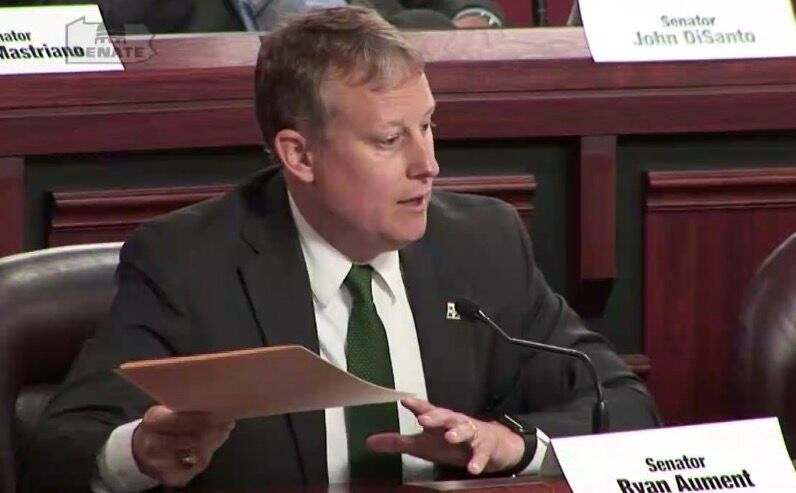 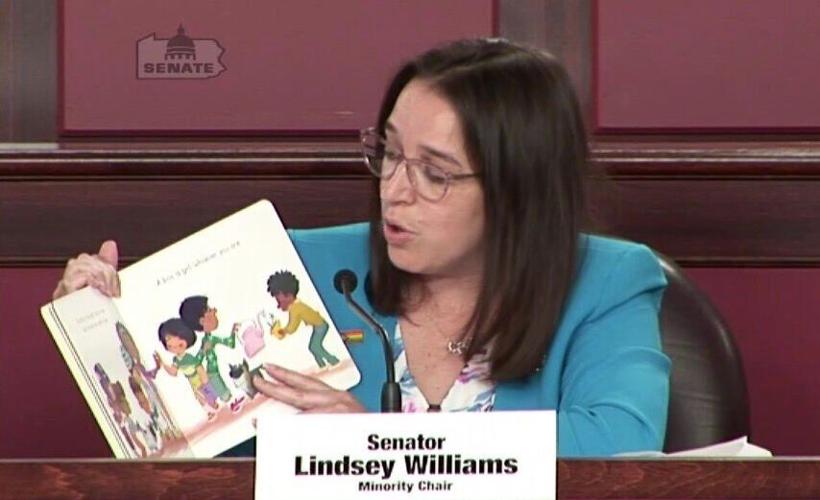 Sen. Lindsey Williams, D-Allegheny, holds a children's book which she characterized as one of inclusivity and positive reinforcement for the LGBTQ+ community. A lesson using this book would be barred from Pennsylvania schools under a recent legislative proposal.

Sen. Lindsey Williams, D-Allegheny, holds a children's book which she characterized as one of inclusivity and positive reinforcement for the LGBTQ+ community. A lesson using this book would be barred from Pennsylvania schools under a recent legislative proposal.

HARRISBURG — Party-line voting carried proposals to the floor of the Pennsylvania Senate that would enact parental notification for sexually explicit content in school curricula and bar instruction about gender identity and sexual orientation in elementary schools.

The Republican majority on the Senate Education Committee approved the bills by 7-4 margins with all Democratic members in dissent.

The bill seeks to prohibit classroom instruction on gender identity and sexual orientation, from pre-kindergarten through fifth grade. It would require schools to adhere to academic standards for sex education, which begins in sixth grade.

Schools would be barred from withholding information from parents including on changes to “services or monitoring related to the student's mental, emotional or physical health or well-being.” The bill includes “protections” for LGBTQ+ students, preventing parental notification if a credible risk of abuse or abandonment is presented.

In Pennsylvania, sex education begins in the sixth grade. There’s no mandate for sex-ed beyond lessons on the spread and risks of HIV and sexually transmitted diseases. There are academic standards for school districts that veer into, rather than emphasize, sex ed in a health curriculum but don’t approach national standards that advocates promote.

Sen. Doug Mastriano, R-Adams/Cumberland/Franklin/York, the Republican nominee for governor, called it “madness” to speak about sexuality with students in elementary school. He said conversations should be had on the quality of the state’s education rather than “indoctrination.”

Sen. Lindsey Williams, D-Allegheny, the committee’s minority chair, directed questions to Martin challenging the bill’s enforcement with respect to nuanced situations, such as if someone overheard a student talking about their own gender identity or a student bullying another for having a gay parent.

“This isn’t Florida’s ‘don’t say gay’ bill. It’s worse. It’s saying that being gay, having trans parents, having a lesbian friend is wrong. This bill is imposing a belief that being straight, CIS gender is ‘right,’ ‘normal,’” Williams said.

Sen. Ryan Aument, R-Lancaster, proposed Senate Bill 1277 on explicit content. It defines sexually explicit content as imagery, direct or implied, plus explicit description of sexual conduct along with materials with nudity accessible to anyone from kindergarten through eighth grade.

Aument held a manilla folder he said contained examples from materials potentially found in public schools. Such materials would risk an adult’s employment at the workplace and isn’t appropriate for a school, he said.

Sen. Lindsey Williams, D-Allegheny, likened it to a book ban and said it risked excluding materials about female puberty or classical art that included images of works like the “Statue of David.” She raised concerns about inclusion and how the bill would impact LGBTQ+ community, drawing parallels between this legislation, the House bill on identity and orientation and the similar law recently enacted in Florida tagged by opponents as the “don’t say gay” bill.

Williams also raised concerns about implementation at the local level. The bill requires school books and accompanying materials along with library materials to be reviewed. Notifications would be sent to parents, who could opt their child out and force a school to provide alternative materials.

“I am concerned this bill takes us down the path to censorship,” Comitta said.

Sen. Michele Brooks, R-Crawford/Erie/Mercer/Warren, said critics were using the bill as political fodder. The content deemed necessary for parental notification was hand-delivered to legislators out of concerns for emailing such imagery, she said.

“How far off track have we really gotten as a culture and a society? This is not up to school districts to put this content into our children’s libraries,” Brooks said.

After SCOTUS abortion decision, advocates look toward next chapter