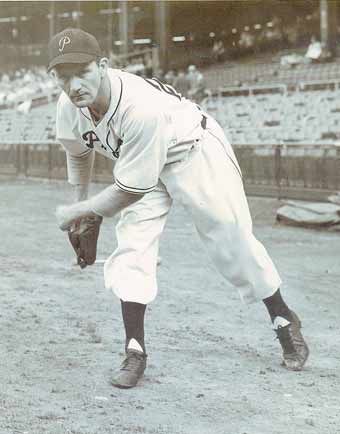 Fritz Ostermueller, a southpaw, had a distinctive style known as the rocking chair windup. He compiled a record of 114-115 in a 15-year major league career, pitching for the Boston Red Sox, St. Louis Browns, Brooklyn Dodgers and Pittsburgh Pirates. (Courtesy photo) 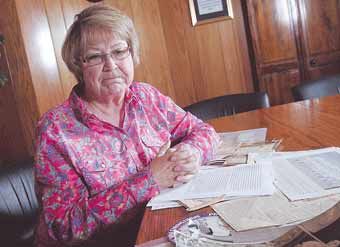 Fritz Ostermueller, a southpaw, had a distinctive style known as the rocking chair windup. He compiled a record of 114-115 in a 15-year major league career, pitching for the Boston Red Sox, St. Louis Browns, Brooklyn Dodgers and Pittsburgh Pirates. (Courtesy photo)

A pivotal scene in the new biopic about Jackie Robinson shows the Brooklyn Dodgers rookie stepping to the plate to face Pittsburgh Pirates pitcher Fritz Ostermueller. Robinson takes a fastball to the head before Ostermueller tells him: "You don't belong here."

The scene shows the enmity Robinson faced when he integrated baseball in 1947. But it didn't quite happen that way, says Sherill Ostermueller-Duesterhaus, who points to a news account from the game as evidence and says the movie, "42 - The True Story of an American Legend," tarnishes her late father's legacy.

"A single Google search would show he was not hit in the head, and that there was no fight on the mound,” said Ostermueller-Duesterhaus. “They also would have learned that my father was a lefty. In the movie, he’s depicted as being a right-hander.

“Surely there were real incidents of racism that they could have used without making something up. You shouldn’t have to make anything up. Truth and fiction get blurred in this picture. It put a spotlight on my father for the wrong reason."

After seeing the movie, Ostermueller-Duesterhaus said she returned to her Joplin home and pored over numerous scrapbooks about her father, who hailed from Quincy, Ill., and threw 390 games in his 15-year career in the major leagues. In his clips she discovered a faded envelope from The Pittsburgher Hotel in which her father kept a newspaper story about his encounter with Robinson. She hadn't noticed it previously.

“I was 6 months old when it happened,” she said. “I knew about it and that it was important because my mother had told me about it.” But she never thought the incident would be used 66 years after the fact in what she calls an unfair representation.

The scorecard from the May 17, 1947, game at Pittsburgh's Forbes Field shows Robinson was the Dodgers' second batter. Ostermueller hit him with his second pitch, which was high and inside, according to news accounts. The throw caught Robinson on the left wrist.

Asked at the time, the pitcher claimed no ill will toward Robinson. The clipping tells the story of how he had studied Robinson’s technique and noticed how he crowded the plate and lunged at every pitch.

“He didn’t give the pitcher much room," Ostermueller is quoted as saying. "I didn’t like that at all because I want my half of the heart of the plate, and no batter, no matter who he is, will crowd me out of my share.  “I told my wife the night before I pitched that I might have trouble with Robinson — that one of my pitches would hit him if he didn’t move back. I knew, too, some people would say it was intentional. It wasn’t at all, but in his first trip to the plate I hit him. After that, he moved back a couple of inches and showed me some respect.”

The Pirates won the game, and Ostermueller played through the following season before retiring. He died from cancer, at age 50, in 1957.

Ostermueller-Duesterhaus, who was adopted and the only child of Faye and Frederick “Fritz” Ostermueller, said she enjoyed the movie about Robinson. "It’s something that young people should see because of the courage of Jackie Robinson. He made baseball a better game and the world a better place," she said.

But, she says, the movie bears another lesson, which is to get the facts straight.

“There is nothing I can do now but try to set the record straight,” she said. “My father was a good pitcher. He was a good man. You know, it’s hard to defend yourself while you are no longer here. I’m just a daughter trying to defend her dad.”

Details for this story were reported by The Joplin, Mo., Globe.

Front-line brides getting a big gift

Pulse of the Voters 2020 Video Series