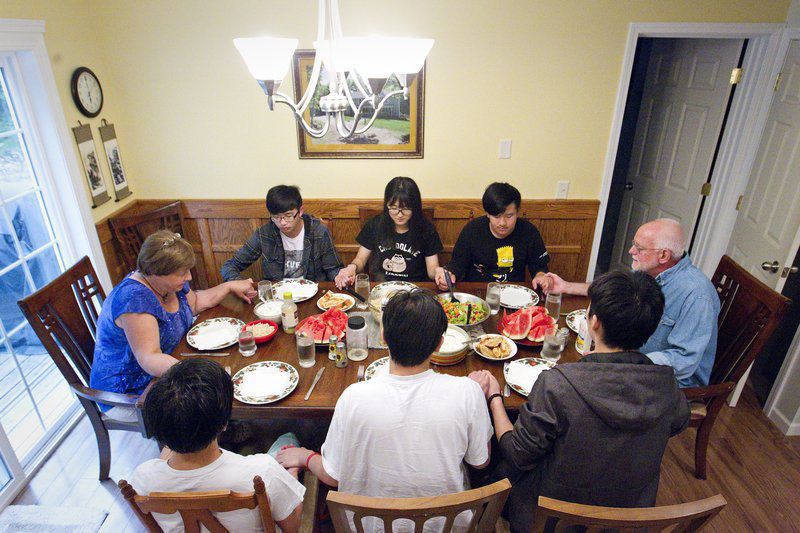 Janice Slater, left, and her husband Gary Slater, right, pray before dinner with six of the Chinese exchange students they have been hosting for the school year in their Michigan home. 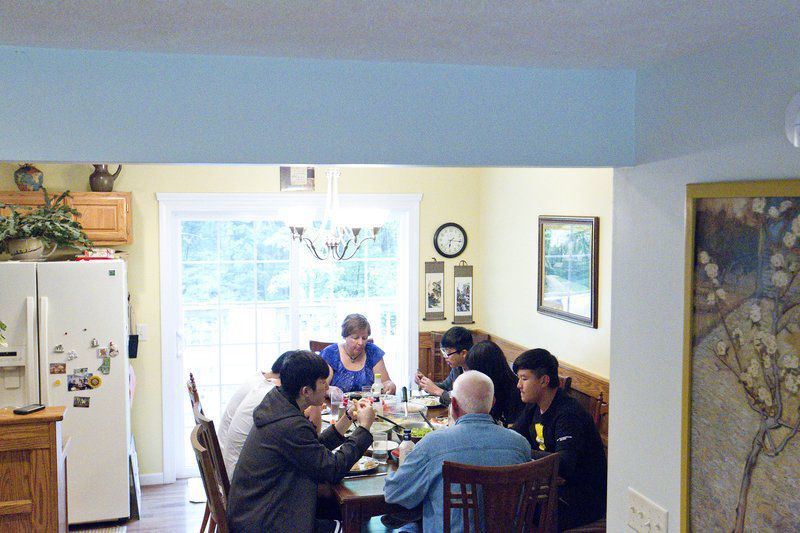 Gary and Janice Slater have dinner with six of the Chinese exchange students they have been hosting for the school year in their Michigan home. 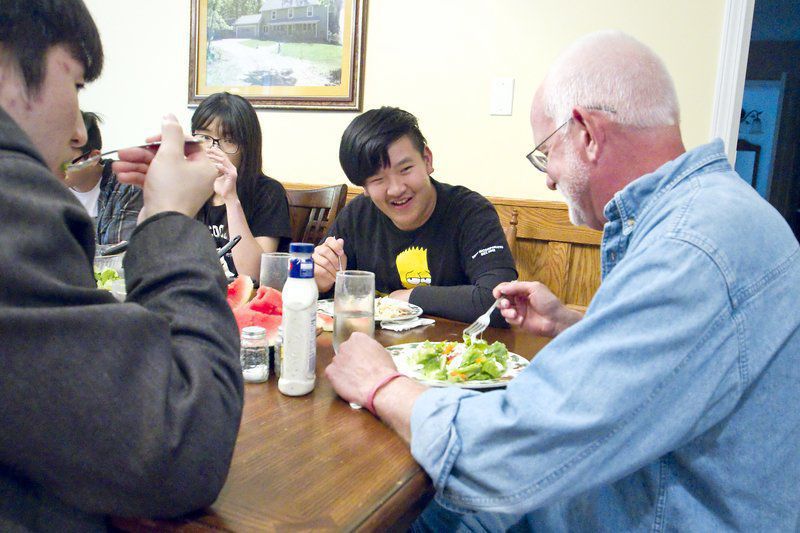 Gary Slater, right, jokes with Zi Min He, 16, during dinner with six of the Chinese exchange students Gary and his wife Janice have been hosting for the school year in their Michigan home. 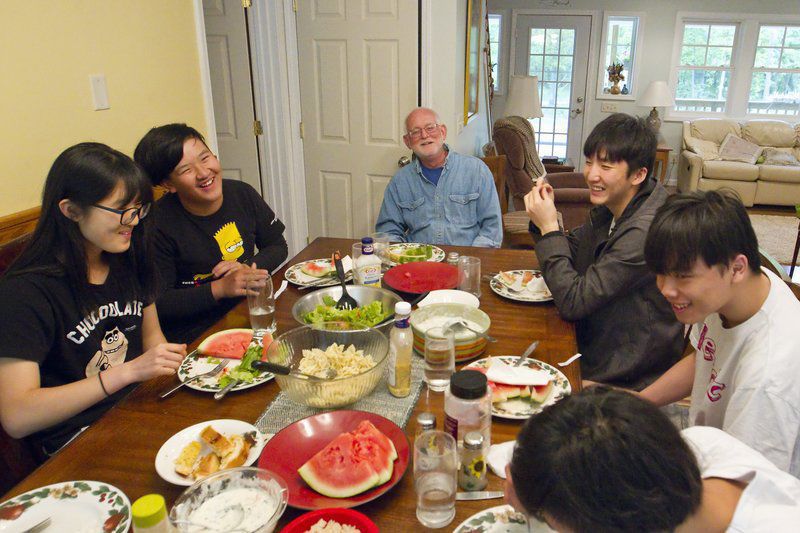 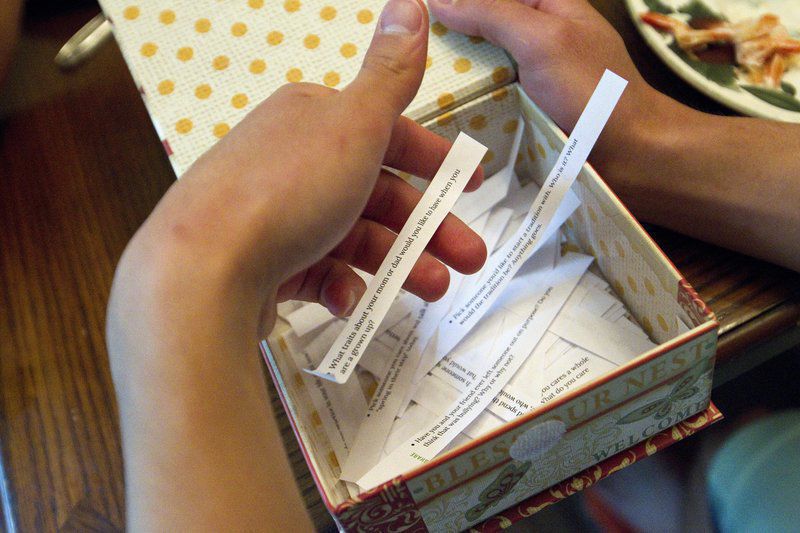 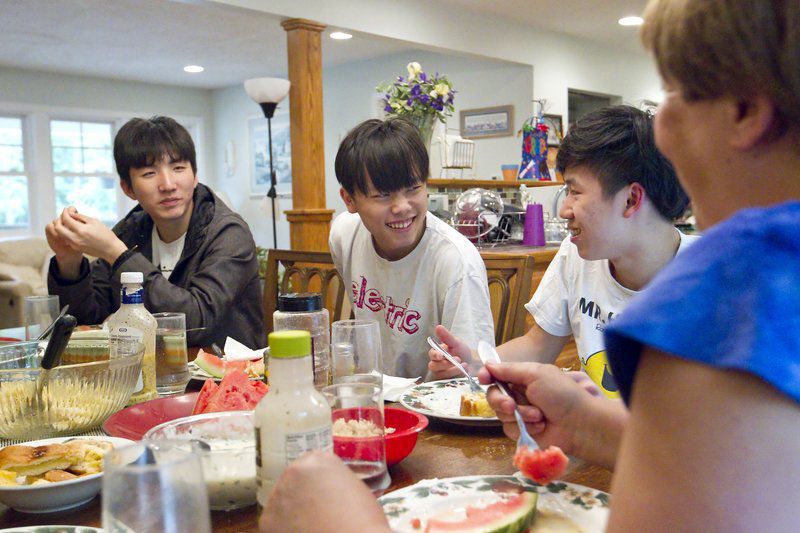 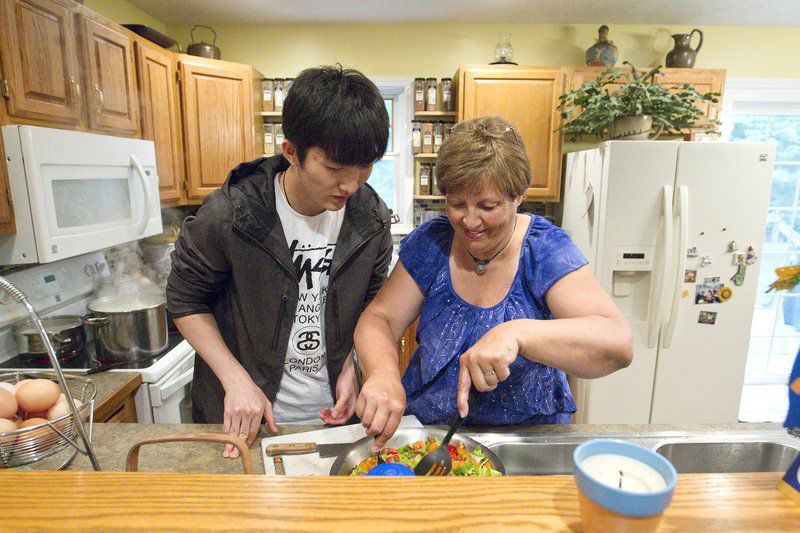 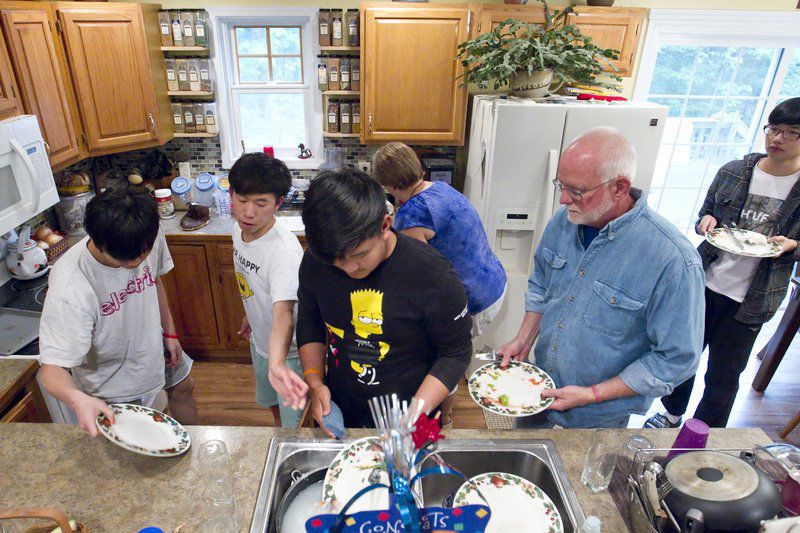 Janice Slater, left, and her husband Gary Slater, right, pray before dinner with six of the Chinese exchange students they have been hosting for the school year in their Michigan home.

Gary and Janice Slater have dinner with six of the Chinese exchange students they have been hosting for the school year in their Michigan home.

Gary Slater, right, jokes with Zi Min He, 16, during dinner with six of the Chinese exchange students Gary and his wife Janice have been hosting for the school year in their Michigan home.

TRAVERSE CITY, Mich. — Each of Gary and Janice Slater’s nine bedrooms are filled but their home is silent.

The couple joined a cadre of families last year who opened their homes to international students studying at Traverse City Area Public Schools. The couple hosted six Chinese students this year, but the house isn’t brimming with the usual commotion of a larger family.

Gary’s temporary children are often content playing games on their phones, studying their classwork and hiding away in their rooms. It’s a challenge to initiate conversation with a generation increasingly focused on the digital world, Gary said.

The Chinese students are not too far separated from American students in that regard. The long-time high school teacher said he has grown used to seeing kids with their heads buried in their phones. It has become the norm. But Gary is hopeful for change.

The Slaters joined the program with a desire to help people. Gary wants to positively impact the lives of others. He wants his students to learn from him. More importantly, he wants to make a difference.

“It’s just being good parents to these students,” Gary said. “It’s a lot of teaching. Some of these kids haven’t been to the United States and it’s a different culture and a whole different way of life. It’s about teaching, loving and giving.”

The family has allowed students from another school, churchgoers and other community members to stay when needed during the past few years. International students were a natural extension to that hospitality, Janice said.

“This was a way for us to continue doing what we’re doing and to make some additional money,” Janice said.

The school district recruited 49 of those students into its high schools — more than doubling last year’s 23 international students. Most of the juniors and seniors arrive from China but the district is actively seeking to expand both the size and scope of its program.

And for a financially justifiable reason.

The school district raked in almost $750,000 through its international exchange program this year alone. Most students recruited into the program provide more than three times the per-pupil funding a local student can offer through state allowances.

“We’ve operated since we’ve started in a positive position,” said Joe Tibaldi, the school district’s director of international programming. “We’ve been able to pay for administrative expenses and have a net positive response as a district. But profit isn’t really our goal. Our goal is global competency.”

Students visiting on an F1 visa — a nonimmigrant visa for those wishing to study in the country — each provide the district with Michigan’s $7,391 foundational allowance and an additional $16,800-$25,000 tuition fee depending on the services provided during their junior year.

Seniors lose their foundational allowance but continue to pay tuition fees to the district which in turn helps cover classes, transportation and other costs associated with dual-enrollment at Northwestern Michigan College.

Projected revenues next year are offset by a bevy of expenses including $74,000 for food and technology services. English language support classes and additional tutoring require more than $60,000. Then the school district will pay support staff, conference fees and marketing expenses — totaling another $70,000 in overhead costs.

In total the program is expected to generate a net profit of more than 30 percent of expenses next year, bringing in $345,000 for the district, according to a plan obtained by the Record-Eagle through a Freedom of Information Request.

The earnings generated through the program extend to host families as well. The Slaters, for instance, began with two students last year but decided the financial incentive for growing their involvement was well worth the energy.

The programs that deliver students to the U.S., like Weiming Education Group, help provide host families with a stipend of $533-600 per month, per student. Hosts in turn are responsible for feeding and housing students during their 10 months in the country.

The Slaters brought in nearly $32,000 for opening their home this year — just shy of the local school district’s starting $34,834 wage for full-time teachers. Chinese students have created so much revenue for the couple that they turned their effort into a business.

True North Community, as Janice calls it, will help separate the revenues and expenses of the program from the couple's personal finances. She said pooling the cash together will allow for simplicity with her taxes — although Janice admits she’s still in the process of “getting that all together.”

“It’s not a get-rich-quick thing,” Gary said. “We both still have to work … We’re able to make some money, yes, but nothing much. You do make more money when you increase the numbers though.”

The Slaters said they built their nine-bedroom home a few years ago for the explicit purpose of housing those in need. Their dining room regularly hosts eight to 10 people — 20 during the holidays — but it's still too small, Gary said.

So the couple is looking to expand.

Janice said the family is eyeing the possibility of constructing a second home to house additional students through the program. The funding they’ve received has allowed the family to continue its conviviality and make some additional cash in the process, Janice said.

“I don’t think right now there is an end in sight,” Gary said. “It’s our energy. People our age look forward to the empty nesting thing … We’ve never been that way. We don’t see our lives that way. We want to continually help people.”

The school district has additional expansion plans of its own. The district aims to increase its international student population to 74 students next year and diversify its global reach well beyond Asia. Falling short of projections with 70 students would still bring in at least $1.2 million to the district next year.

“There’s a lot of opportunity here,” Superintendent Paul Soma said. “There is a real potential business model with this. It raises opportunity for partnership with other entities and private partners.”

The district still is in “conceptual planning” stages for partnering with developers to create an international campus that would house up to 160 students from around the world. Soma said the school district has reached out to local hotels and Northwestern Michigan College to examine additional housing options as well.

Dinners aren’t as quiet as they used to be at the Slater home.

The family began using “conversation cards” in the past few months to get their students talking. They’re still quiet and focused on their phones — but that’s expected, Gary said. It’s not their job to change habits; just to make the stay in America as constructive as possible.

And the couple is making a difference, Gary said. A magnetic, rotating chore board in the house provides the students with life skills. Janice taught the group a lesson in gift giving this year — something Gary said they’re not accustomed to in Chinese culture.

Visits to iconic places in the region helped the students understand life in northwest Michigan. Home-cooked meals give them a taste of the Midwestern culinary scene. (Her Chinese students really love spaghetti, Janice said.)

Perhaps most importantly, the students’ short stay will help them prepare for life on their own. Many of the students will attend American universities where they’ll be forced to adjust to a new culture on a more permanent basis, Gary said.

“It’s important to encourage them and to speak into their lives,” Gary said. “I like to think that I’m somehow making a difference. They need direction on things in their life and it’s great to be able to speak to that.

“That’s the biggest thing for me — to become a part of who they are.”