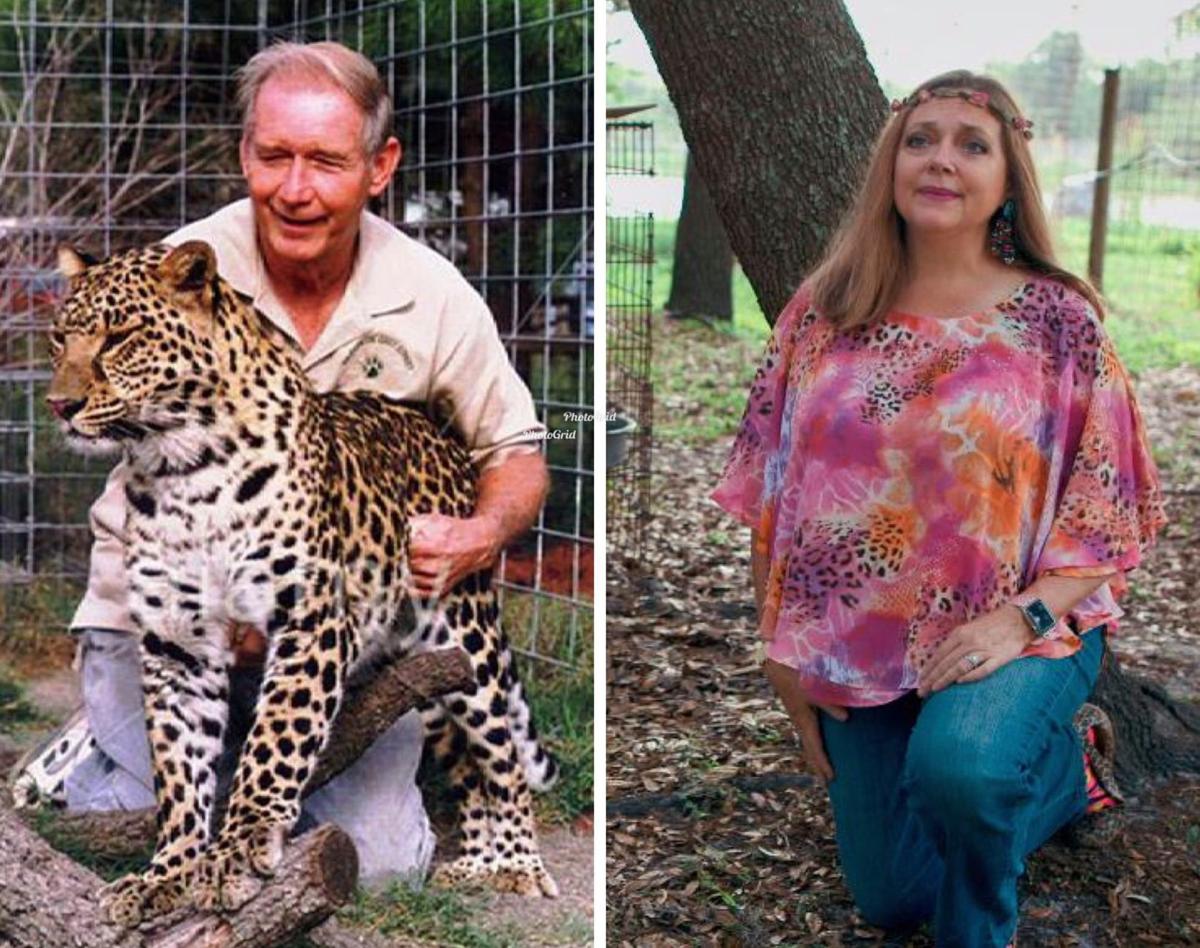 Multi-millionaire Don Lewis, left, was reported missing on Aug. 19, 1997, and hasn’t been seen since. His wife at the time, Carole Baskin, was the last person to see him alive. She denies any role in his disappearance. The Hillsborough County Sheriff’s Office continues to investigative his disappearance, featured in the Netflix documentary, Tiger King. 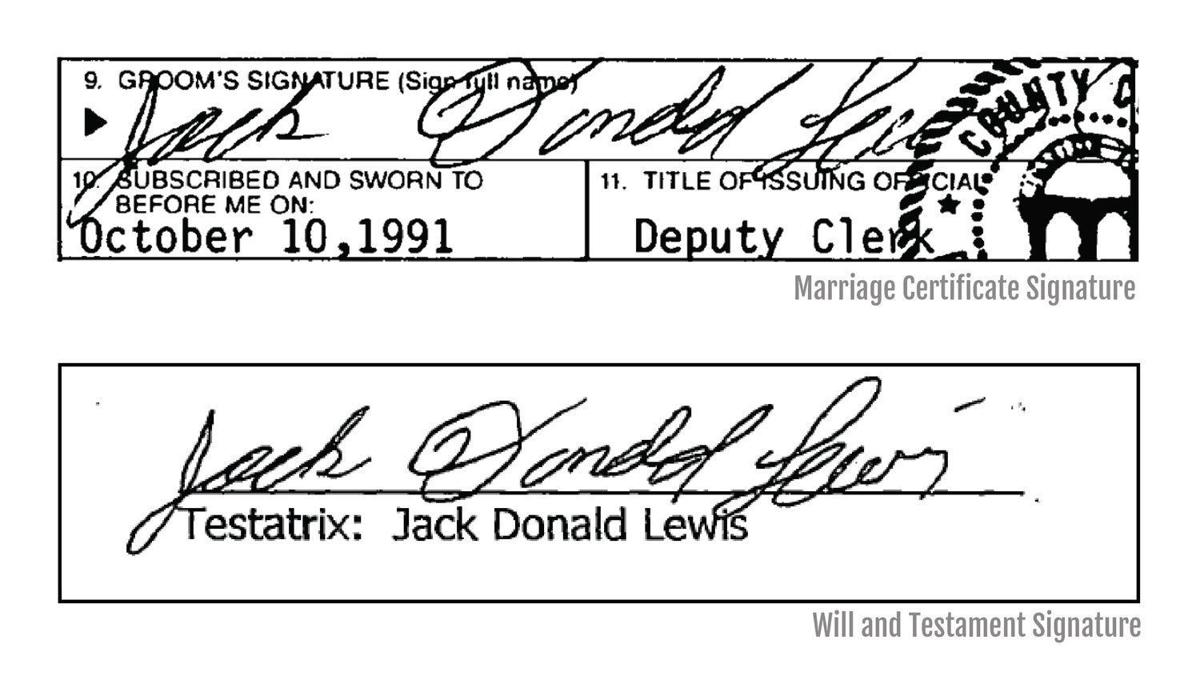 Handwriting expert Thomas Vastrick said that the signature on Don Lewis’ will was traced from his marriage certificate.

Tiger King Don Lewis’ signatures on his will and his power of attorney were traced from his marriage record, a handwriting expert concluded of documents that surfaced after the multimillionaire’s 1997 disappearance.

His conclusions match those of handwriting expert, Willa Smith, who also found that Lewis’ signature was “the product of tracing.”

The Netflix documentary Tiger King detailing the animal sanctuary owner’s disappearance wound up capturing the public’s interest in this period of self-isolation during the coronavirus pandemic.

After his disappearance, Carole Baskin, his wife, produced the will and power of attorney that gave her control of his estate.

Matt Steffey, professor of law at Mississippi College of Law, said this revelation is “absolutely” evidence that prosecutors would seek to use if Baskin were ever charged in the disappearance of her then-husband, Lewis, who was declared legally dead in 2002.

As a result of this, she was given “total control over his affairs,” Steffey said. “It ties a bow on what could be her scheme to get him out of the picture.”

The Hillsborough County Sheriff’s Office previously investigated this allegation of forgery and turned the case over to the Florida attorney general’s office, which determined that the five-year statute of limitation on forgery had passed.

One of those whose signature appears on both the will and power of attorney is Susan Aronoff, who has told deputies that she testified she was there for the will signing when she actually wasn’t.

In a series of Feb. 25, 2005, emails attributed to Aronoff to a recipient whose name has been blacked out, she wrote that when Don “disappeared and the kids were contesting the will, I got a phone call from Carole to go to court because it seems that I was one of the supposed witnesses on the will! …

“The problem with the will is that Carole had me backed against a wall at the time and from fear of her then I signed a statement, swearing it to be my signature, even though it wasn’t. I could go to jail for that I’m told.”

Aronoff also wrote In the emails, which authorities have, that she had a letter of recommendation for her Class I certification to own big cats with what purported to be Don’s signature on it. “Don told me that was Carole’s version of his signature and that if I had ever seen his, I would know that what I had wasn’t it.”

She wrapped up by writing that “most of us who dealt with Carole are truly too afraid of her to do much against her.”

Aronoff could not be reached for comment. Nor could Doug Edwards, whose signature also appears on the document, or Baskin, who prepared the documents.

Lewis’ longtime executive assistant, Anne McQueen, said the only will and power of attorney she knew about was under her desk.

Lewis made McQueen the executor for his will, power of attorney and life insurance. His family said he trusted her completely.

But on the new will and power of attorney that emerged after his disappearance, his wife was named the executor.

McQueen said the will that Lewis had signed and given her for safekeeping was “absolutely” different than this new will that appeared, which gave Baskin the vast bulk of the estate.

The attorney for Lewis’ family hired Smith to do handwriting analysis when they challenged the power of attorney and will in 1997.

Lewis’ daughter, Donna Pettis, said her family followed the advice of their lawyer and didn’t contest the conflict over the handwriting analysis any further.

“Our attorney was afraid that if Carole continued serving as conservator over the entire estate, then we were risking that our trust fund would be depleted by the end of the five-year term,” she said.

Under the new power of attorney, Baskin was given control of her husband’s estate in event of his “disability or disappearance.”

Jackson, Mississippi, lawyer Paul Varner, who has handled estate planning for more than three decades, said he has never seen a power of attorney document that included disappearance.

Clients generally don’t raise the issue, he said. “They know they might be made incompetent due to an accident, but most people don’t think about disappearance.”

Baskin has said she did the documents because Lewis liked to save money on lawyers.

She addressed this point in an online post she has since taken down.

“Some people made a fuss about using the word ‘disappearance,’ but Don had told me about people going to Costa Rica and disappearing, and he was dealing with the mob down there, so I thought that seemed like a potential threat and included the word,” she wrote. “I also included disability because of Don’s increasingly strange behavior. Our Costa Rican attorney, Roger Petersen, said the Helicopter Brothers were their version of the mob, and Don was loaning them money.”

Petersen, a Miami lawyer who represented Lewis, said he didn’t recall ever calling the “Helicopter Brothers” (the Villalobos Brothers), the Costa Rican version of the mob.

“The Villalobos Brothers were well known in the expat community during that time frame,” he said. “They took in money from investors and paid 3% per month. Thousands of expats and locals invested with them, and they were well respected in the community, even building and funding the local Baptist church.”

In 2001, “their operation collapsed, and those investors that did not withdraw their funds in time ended up losing their money,” Petersen said.

A judge froze the accounts after Canadian authorities believed drug dealers were using it to launder money while Costa Rican authorities suspected the fund was a huge Ponzi scheme. There was only $7 million out of an estimated $300 million or more that was left.

Both McQueen and Lewis’ family said it was no secret he wanted to divorce Carole.

Days before he disappeared, McQueen said Lewis told her, “Anne, I am serious this time. It [the marriage] is definitely done and over with.”

Pettis told MCIR that the past 23 years have been an exhausting journey for her family.

“Our family had lost all hope years ago,” she said. “We pursued every avenue available to us at the time.”

And now with this new revelation and others, she said she and her sisters are hopeful what they believe is their father’s homicide will finally be pursued. “People are now seeing what we’ve known for a long time.”

Research assistance for this story provided by Andrea Ledwell, the MCIR Team and the Ripper Team.

Mitchell’s new book for Simon & Schuster, Race Against Time, details his reporting that helped lead to convictions in nine unpunished murders from the Civil Rights Era. The book is now available in hardback as well as on Kindle and audio versions. Signed and personalized copies are available through MCIR.

Now that we're in the groove of working from home, don’t end it

Expert: Signature of Tiger King's Don Lewis 'traced' on his will